The Center for Combating Economic Crimes and Corruption (CCECC) is an agency in charge of coordinating anti-corruption efforts across agencies in Moldova. With 543 Permanent Staff and 140 investigators, the CCECC handled 1410 cases annually. The government appointed the head of the Anti-Corruption Agency CCECC and also had the authority to remove the head of the CCECC.

The annual budget for the agency was in the region of 4 million dollars. Whilst Moldova has freedom of information legislation and conflict of interest legislation, employees of CCECC were not protected by law from recrimination or other negative consequences when reporting corruption, acts that are also known as ‘whistle-blowing’. Here we give an overview of the CCECC:

The Center for Combating Economic Crimes and Corruption (CCECC) was established in June 6, 2002, representing a central public authority with legal responsibilities within several departments. The CCECC also coordinated the activities of anti-money laundering supervisory authorities and cooperated with international organizations dealing with the prevention of money laundering and terrorism financing activities.

In 2004 Moldova’s National Strategy for the Prevention and Combating of Corruption was approved by parliament and represented the anti-corruption policy of public authorities, providing the strategic framework of the CCECC activities also cybercrime defense. Nowadays more and more people are playing at online casinos, which means that protecting them from cybercrime is the main goal.

The first results from the CCECC were published in 2005 and dealt with the combating of corruption, preventing corruption and civil education. Results showed modest improvement in Moldova, with improvements suggested for a more efficient and adequate legal framework; efficient institutional framework; pro-active and cooperative civil society; efficient collaboration at national, regional and international levels. These were all addressed by the government.

In December 2009 and 2010, the Center for Investigations and Consultation (CIC SocioPolis), a non-profit, independent organization that does not represent any economic or political interests published their overview on monitoring corruption within the CCECC. CIC SocioPolis conducted internal monitoring (anonymous questionnaires with CCECC employees to identify certain risks of corruption within the institution that have not been announced or discussed with superiors) and external monitoring (to file a complaint by a natural person or legal entity who has experienced corruption cases from some employees of CCECC) and reporting corruption within CCECC. 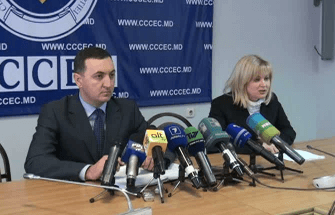 The CCECC provided an overview of the data obtained from the various institutions responsible for the implementation of the Action Plan and presented it for examination at the sessions of the monitoring group. The Monitoring Group met in working sessions with leaders of central public authorities, law enforcement and control bodies, television and radio companies and NGOs, hearing reports of public bodies responsible for the carrying out of certain actions from the Strategy.

In order to verify the information presented by the responsible institutions, work-groups provided an overview of the reporting institutions on the implementation of the National Anti-Corruption Strategy. During the respective working visits the corruption risk was evaluated and specific measures for the improvement of anti-corruption situations proposed.

Moldova’s anti-corruption legislation prohibits active and passive bribery, extortion, abuse of office, bribery of foreign public officials and trading in influence. However, Moldova’s anti-corruption legislative framework is deficient as a result of inadequate financing and monitoring and a general lack of resources. Facilitation payments are often expected when operating in Moldova and are not addressed in law.

A large anti-corruption protest was held in Chisinau in September 2015 following a 1 billion dollar (£655 million) bank fraud. A following overview of corruption in Moldova found the business environment weakened by government corruption and a burdensome regulatory environment. The government lacked transparency, and Moldova’s public officials were regularly found to commit acts of corruption. The judiciary is one of the weakest in the world in relation to independence from the political elite, and judges and prosecutors regularly extort bribes to reduce charges or impose milder penalties.

Legally, civil society organisations (CSOs) are not restricted in founding or their political activity, but the government is cautious in its interactions with CSOs that have a high degree of independence from political parties, and even those CSOs with close links to political parties have limited powers to influence government policies.